Round Hill is a bucolic town surrounded by recent development. Its historic claim to fame is that it is named after a nearby hill that served as a signal post for both the Confederacy and the Union during the Civil War. Located seven miles from the Shenandoah River and separated from West Virginia by one mountain (which has the Appalachian Trail running along the top of it), the town is said to have a “genteel allure.”

Like many of the communities in Loudoun, Round Hill has a rich history. In 1875 the Washington and Old Dominion railroad arrived there and ten years later, the Howell Brothers’ furniture factory was established. These days, locals honor their traditional roots with monthly bluegrass jam sessions at the Round Hill Arts Center. Another gathering that keeps the town hopping is the annual Round Hill Hometown Festival in May featuring a parade, a pie-eating contest, a downhill derby and a 5K run.

Other things to do and enjoy are the Bogati Winery, Stoneleigh Golf and Country Club (named the prettiest golf course in Northern Virginia by Golf Magazine), Hill High Country Store and Sleeter’s Lake south of town. For those looking for fine dining, look no farther than Savoir Fare (catering), and for down-home cooking, Tammy’s Diner. 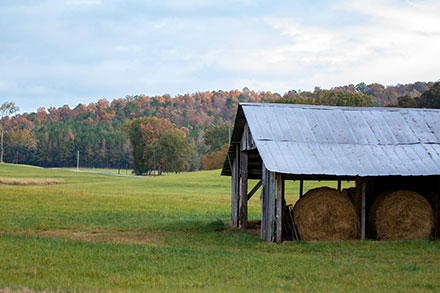